This year is our eighth year homeschooling, so I’m not exactly a novice at this thing. When it comes to editing my teens’ essays, you would think I’d be super cool at it by this point.

When I’m faced with reading one of their papers, some switch flips in me and out comes this HORRIBLE RED PEN MONSTER.

This is the police composite sketch of my actual transformation. 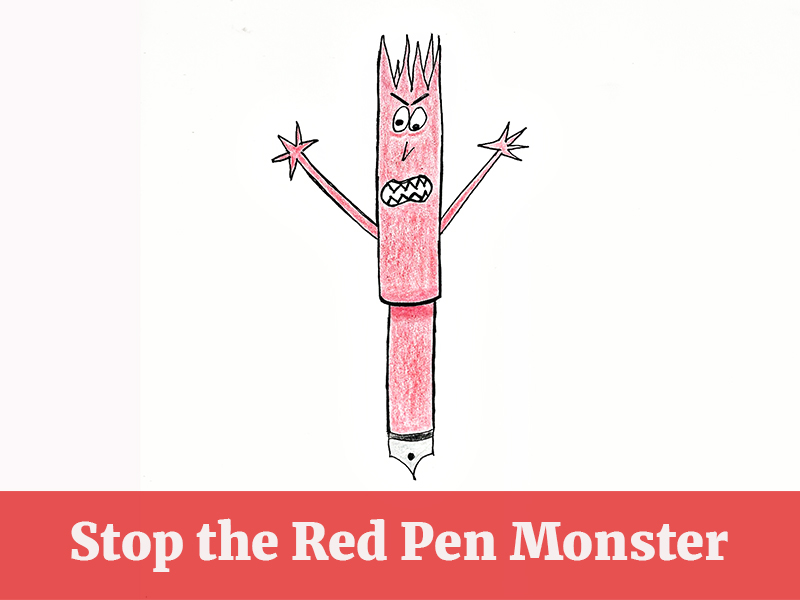 Ugh. I hate it, guys. I really hate that the hypercritical feelings that come over me. And what’s worse is I’d let those feelings out onto my poor kids who are trying hard. I dumped all of that negativity and panic that they aren’t learning right onto their shoulders.

Not one of my shining moments as a mom.

I felt terrible afterwards. I apologized, of course, and tried to make amends. But I knew something had to shift in me if I wanted to keep from doing permanent damage to their writing life.

Unfortunately I didn’t find an Alice in Wonderland Eat Me cookie that would make me magically grow as a person. I had to actually do the mental work to change.

One unexceptional day, it dawned on me that if I waited 24 hours between reading and responding to their writing draft I was much calmer & kinder in my feedback. That waiting period gave me time to tame the critical monster and gain a more realistic perspective of what teen writing looks like.

Let me tell you, it ain’t pretty. Their initial writing looks messy. Disorganized. Loose trains of thought. Unrelated connections. It’s all in there. Reading that all secondary English instructors deal with these problems also helped me relax.

Waiting that 24 hours was the probably biggest step in my red pen monster recovery. The kid hands me the draft and I say, “Thanks, hon, I’ll have some feedback for you tomorrow.” Then I read it. And then sleep on it!

Another insight came when Julie Bogart reminded us about the joy we felt when our kids were babies learning to talk. We celebrated their attempts to speak, even when it was babbling nonsense. Don’t you remember babbling right back at your baby and how their face lit up when you did? They kicked their chubby baby legs and smiled those toothless grins because you engaged with them.

Wow, I thought. What if I respond to their writing attempts with that kind of joy and wonder? What would that look like?

Of course it doesn’t look like responding with my own disorganized thinking or unrelated connections. But what if I supported their learning with the same intent of engagement & encouragement as when they learned to talk?

For me, that type of response and support meant finding value in their perspective that is showing up on the page. I probably heard that from Julie too, but I can’t remember exactly where.

This isn’t always easy, you guys. My oldest son and I are on opposite sides of quite a few social issues. And I mean OP-PO-SITE. It’s challenging to swallow my own perspective and not try to force my way of thinking onto him. (Morals! Values! I’m required to download those onto him!) Again, there isn’t a magical Eat Me cookie that makes this personal growth easy. But there is Lindt’s sea salt chocolate bar and that’s a close second.

Responding with that same joy means I have to find positive things to say about their writing. In fact, when we’re in the rough draft/freewriting stages, I only say positive things now. I don’t even point out a misspelling yet. And I don’t point out how wrong my son is that feminism is bad, even though that idea makes me do this… 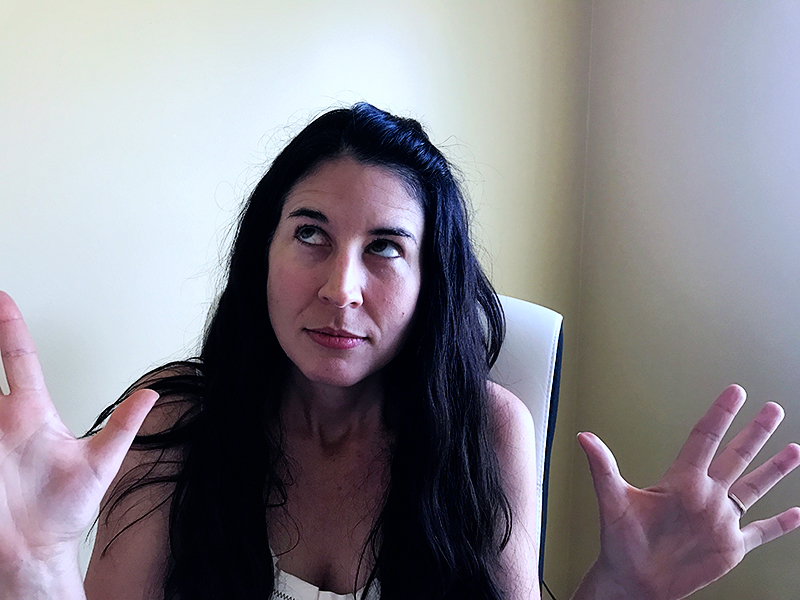 Summing from above the power of maternal forbearance. Amen.

Find the buried gem of an idea. It’s in there, even when you strongly disagree with their perspective.

The last step I use to tame that red pen monster is a narrow and expand idea that comes from The Writer’s Jungle. (Look for it in chapter seven.) After I find that gem of an idea – the value in their perspective – in the messy writing, I pull it out and ask questions that will help my teen expand on the idea.

That’s it. Not all that complicated.

Except when I have to figure out a way to positively respond to his perspective on feminism. Then it gets a bit complicated. Figuring out the balance of supportiveness but still playing devil’s advocate (in their eyes) and getting them thinking deeper and from other perspectives is tricky. But it’s still doable! With a double dose of chocolate and maybe an extra 24 hours. Perhaps a cocktail thrown in just because, ADULTING. It’s hard.

As a recovering Type A personality, I have a checklist for these steps. Of course I do! Because I have a bajillion other things to remember and I need a mental backup drive. I do love a checklist.

A recap on taming that red pen monster:

And then go eat another piece of chocolate. You’ve earned it.

Signed,
A spirited feminist who loves her son very much. Even when he’s dead wrong about feminism.

« Maybe I Don’t Hate Poetry After All

What a Homeschooler Should Do If You Didn’t Introduce Shakespeare Early: Don’t Ask Me. »