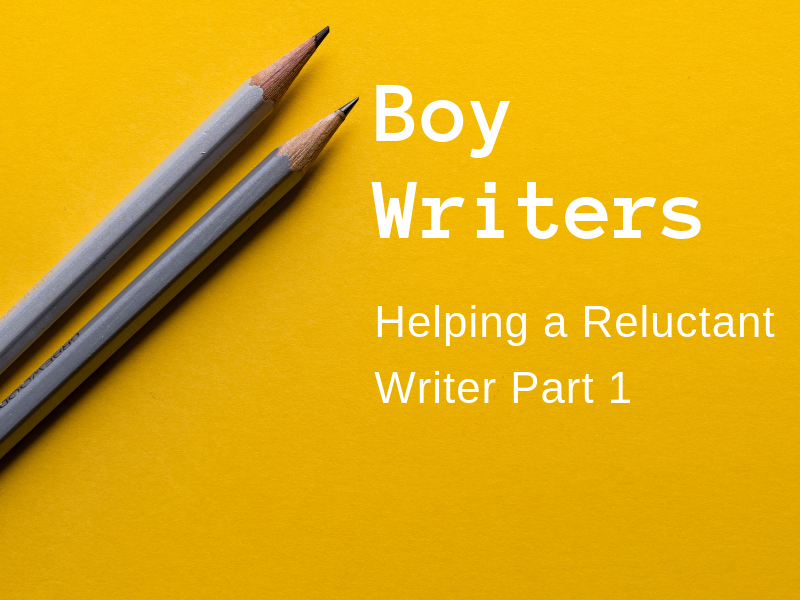 Many boys are reluctant writers.

You know that or you wouldn’t be here, right?

Having a reluctant writer is hard.

You probably know that too, but I’m putting that right up front anyway. It needs to be validated. It’s hard. In our current education culture, advanced skills keep trickling down to lower and lower grades (developmentally appropriate or not), so it’s hard when getting your kid to do bare minimum writing – if that! –  is a fight. We feel this unspoken pressure to make them do more.

We feel as if we’re failing if they don’t like writing. And we worry they’ll never learn to write if we don’t get them writing now.

Let’s also address upfront the kids born with an affinity for words and language. There are some homeschoolers who unintentionally make it seem as if nurturing a young boy writer is like magic. It just works! It’s absolutely not intentional on their part, but unless you’ve had a struggling or reluctant writer, it’s possible to take for granted how easy it is when your kid has an innate talent for language, words and writing.

When we parents of struggling/reluctant writers hear in our homeschool circles these other parents talk about allllll of the writing their child joyfully chooses, we have the urge to bop them on the head. With a harmless Socker Bopper, of course. But in the spirit of catharsis, we want to bop them. Or is that just me?

I’m not going to blow smoke up your skirt there either. You will research one thousand things to try and 999 won’t work. You will lose your patience. You’ll vent to a friend. Waste money on curriculums. Cry. Eat chocolate. Lots of chocolate.

Be prepared for something other than sunshine and daisies, Sweetheart. These are choppy waters.

But I’m here to help! To share the things I tried that worked. Help weed through some of those one thousand things. Granted, there is no guarantee these tips & resources will work for your kid. After all, each child has a mind of his own, even if that mind drives you up the wall at times.

So where do you start?

Start by creating a safe environment for writing. OR NOT WRITING.

If there’s a lot of tension in your home around writing (or lack thereof), this is where you start. You have to heal that bad juju first. Learning always circles back to the quality of the relationship between the student and the teacher.

That’s where I had to start, so no shame, girlfriend. Both of my boys came out of public elementary school with damage around writing, and if that wasn’t enough, I had pour my own terrible attempts to teach writing on top of it. It was not pretty in the beginning.

So how did I begin creating a safe environment for writing?

I dropped all writing requirements.

This is the first move I made in healing the pain around writing. I dropped all writing requirements. For a long time. I did this partly because I needed to get my head straight on how to go about teaching writing in a way that didn’t create more damage. Clearly what I tried to do wouldn’t work. I needed time to research and figure out what to do.

First, my oldest son (my struggling but motivated writer) picked up a pencil on his own about three months later and started writing pages and pages of video game ideas. #win!

Second, my younger son – the capable but reluctant writer? He was entirely happy to not pick up a pencil. Ever. #fail! Or was it…???

If my younger son been like his brother and started voluntarily writing too, I would be one of those homeschoolers who thinks getting boys to write is MAGIC.

It works if you just get out of the way, you guys!

So thank my son for keeping me humble.

I left my boys’ writing alone for approximately two school years. On top of my reluctant writer, the other one has a learning disability that directly impacts written expression, so I had a lot to untangle and figure out. My oldest wrote when he wanted with no revision or edits from me for those two years. My youngest would do a few Mad Libs and a round robin story with me here and there, but that’s it.

Would I do that again? Truthfully, I don’t think so. With hindsight, experience, and a Time-Turner, I would use Jot It Down with my youngest, probably my oldest too who was 10-12 at the time. I’m not getting paid by Brave Writer to say that, no affiliate member or free products for review. I simply believe Brave Writer’s approach to writing works, especially when working with struggling and/or reluctant writers. (And it’s not the only program I tried.) I credit Brave Writer for turning our homeschool’s writing life around.

And look, guys, I use Jot It Down techniques at times with my high schoolers. This technique is useful beyond early elementary. If my teens feel stuck or unclear on their essay topic, we have a conversation about it and I take notes as they talk. I “jot down” their thoughts & help them get a direction going. Of course, you don’t want to buy the Jot It Down program if you have teenagers. So listen to this podcast series to get the gist of what Jot It Down means, and then fill that role for them when needed.

You have to really drop the requirement.

When I dropped the requirement to write, I had to really drop it. I couldn’t let on with nonverbal cues that while I said they didn’t have to write, I really wished they would. I had to act as if I were truly okay with them not writing. EVEN THOUGH I DIDN’T FEEL 100% OKAY ABOUT IT! I wasn’t completely Zen about this stage; I wasn’t sure how it would turn out. (Spoiler alert! It turned out fine. I have two essay-writing high schoolers.) But I couldn’t let on to my doubts. They needed space to heal, to have their feelings, and to have the pressure to perform off of them. And I needed space to figure out the next healthy step forward.

I had to sit with my discomfort and trust that not doing additional damage was a better stopgap at this time than doing more damage.

I have two other ways I worked on creating a safe environment for writing, but let’s break with this possibly difficult-to-digest idea of NOT requiring writing as a means of getting them to write. Even as I type that I realize it sounds crazy. Counterintuitive! But there it is. It was a significant step in healing my boys’ pain around writing.

In the meantime, do some research and reading about writing. I have some recommendations for you.

You can command writing, but you can’t command good writing.

That’s a start. More to come…

« The Joy of Boy Writers: Why do they blow things up?

The Joy of Boy Writers: Helping the Reluctant Writer Part 2 »