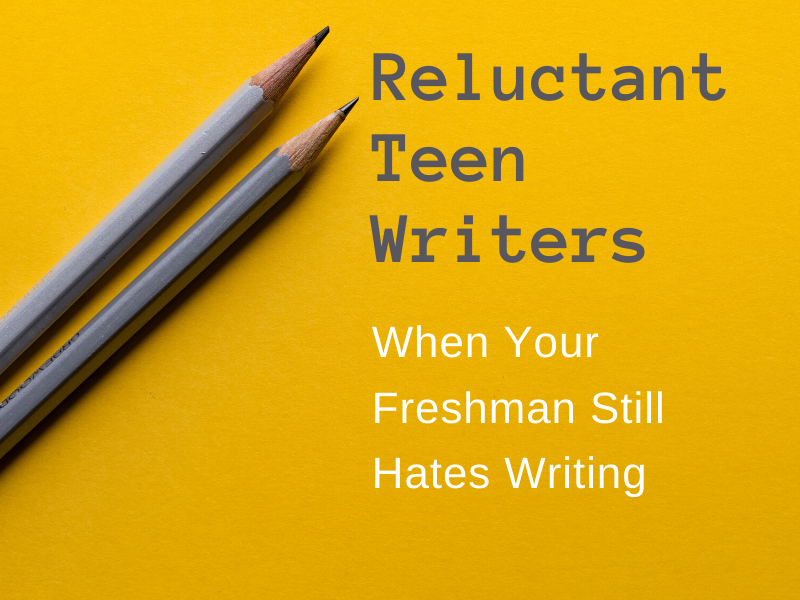 What would it mean to break the mold of teaching high school writing?

My reluctant writer’s 9th grade year was not an expository writing year. My goal for the year wasn’t that he would write expository essays, which is what traditional high school expects. Format, three sources, five paragraphs. Blah! I didn’t try to pour him into that overused mold.

“You can command writing, but you can’t command good writing.”

Instead, my goal was to explore language until we found the spark – a small point of excitement around writing or words. He didn’t have to fall in love with writing. Just improvement. Less pain. A smidgen of positive engagement.

My job was to offer up variety and watch for the spark.

We didn’t dig into our high school writing curriculum until second semester. So let’s put the idea (and comfort) of a systematic instructional approach on the back burner for now. It’s not how I began, even though as a Type A homeschooler a systematic approach is absolutely what I wanted to do. But my gut knew it wouldn’t work with this kid.

First semester I took a highly evolved approach called “throw something at it and see what sticks.” ¯\_(ツ)_/¯ But it wasn’t a willy-nilly, clueless approach either. I read, researched and gathered ideas on various language activities. It was purposeful. But it wasn’t a step-by-step plan to end in an essay.

Forget conventional school expectations, this was a semester dedicated to exploration. To recast the meaning of writing for my son, the power of words, their impact. And maybe a little fun too.

My intent was to help discover what brought meaning for my son, not what it meant for a school. Or me.

Here are the things we did first quarter:

Mystery Line Monday
I picked a quality line from literature, posted it up and we discussed the literary elements, writer’s craft, what words made it work. A little analytical thinking thrown in sometimes. That kind of thing.

Ugly writing
Take a quality passage, maybe from Ray Bradbury’s Sound of Thunder, and rewrite it terribly. Embrace the fun of being a bad writer.

Snip & pin editing
I’ve shared details on it here. I also used articles from Science News For Students. Nonfiction may be easier to see how topics naturally form into paragraphs than something like a narrative essay.

Note taking
We practiced taking notes from articles, laying the groundwork for summarizing and paraphrasing. See, it isn’t pointless busy work. Figuring out what info is important enough to pull out, what can be left behind. Not to mention this skill will come in handy once they’re in college.

Upfront magazine
We used this magazine to practice making claims. After reading an article, I had my teen stick his neck out. We took a stand on the issue and wrote it down in a sentence or two. This lays the groundwork for writing thesis statements. The Yes/No Debate section in this magazine is especially helpful since they present two sides of the same argument.

Breakfast from Mars essay readings
I reviewed the book here. I shared how we examined essays here and here. I threw in some other essay books and op-eds too, but Breakfast on Mars is the best for turning the idea of boring essays upside down. I paid attention to which essays he liked, which ones he didn’t, which topics animated him, which ones he cared less about. These details seem insignificant, but it will help you understand what draws your teen in.

Read book, movie and game reviews
This is something my son specifically asked to do, so we did. What kind of arguments were made? What aspect of the game (or book or movie) did they include? This gets a teen looking at and thinking about commentary.

Weekly literature journal freewrite
This was the most consistent activity we did, almost every week. I committed regular time to this because discussing books was one area I noticed a strong spark. My son seemed to enjoy talking about books and stories, so I capitalized on it.

I described how I started this process because it’s not like you can just say to a reluctant teen writer, “You’ve read all week, now go freewrite your thoughts on this novel.” Uh-uh. It didn’t work like that. Like anything about parenting a teen is that easy?

He had a hard time with this. Only wrote a couple of lines and said he answered all of the suggested prompts. I told him to select a highlighted passage and write about it. Still nothing. So I told him to read one of the freewrite questions aloud and gave him a few thought nudges. He started sharing all of these details! It was so great! So we decided until he gets the hang of this new skill we can talk about the questions and I will jot down what he says in his lit journal.

He is almost finished with his novel. He’s highlighting quality lines and passages as he reads. He has a lot to say about the book – except when he’s required to write about them.

See? No magical turn around. This was a practice in patience. A commitment to incremental steps of progress, not leaps. But the step happening here is significant one: my son began to see himself as having thoughts worth expressing.

Modeling the writing & thinking process and jotting down for him. I did a lot of that and it paid off; my son realized he had things worth saying. I only had to temporarily remove one obstacle – the physical act of writing.

When kids, even teenagers, enter into a new developmental thinking stage, they will likely regress in writing. All this means is they need time for those two wheels to sync up in the brain again. They’ll get there. Acting as their scribe for now isn’t babying them. It’s training wheels that will come off.

I paid close attention to how he was responding, when his confidence seemed to grow, when he expressed frustration, and when I asked for too much at once. This is why Scatterbook notes work – it helps you see what’s working, what isn’t.

Alrighty, guys, that’s enough to take in for now. I’ll follow up with the rest of freshman year in a new post. Stay tuned!

A few ideas I didn’t have at the time but got later and would absolutely include for fun freshman year if I had a Time Turner.
Man Bites Dog
Metaphor Dice
Bring Your Own Book
Otrio (Not language based. Just for fun. It’s our current favorite game.)